What is Root Canal Therapy and what does it treat?

Caries (decay, cavities) invades and affects the tooth in different stages. There are three layers of a natural tooth, the first and outermost is a highly mineralized layer known as enamel, the second layer is known as dentin and the third and innermost layer is known as the pulp. The pulp, which is a soft, fleshy layer, houses the vessels and nerves providing nutrition and sensation to the tooth. This is also the most sensitive of all layers.

When decay-causing bacteria invade the enamel and/or the dentin, the infection can be stopped and treated with the help of tooth-colored fillings. If left untreated, the bacteria proceed to invade the pulp and at this point, fillings alone cannot help. The condition, with symptoms like sharp, radiating, nocturnal pain often accompanied by swelling, is known as Irreversible Pulpitis. It is diagnosed using percussion tests, thermal tests, and radiographs. In this case, the tooth can only be saved with a treatment known as Root Canal Therapy. 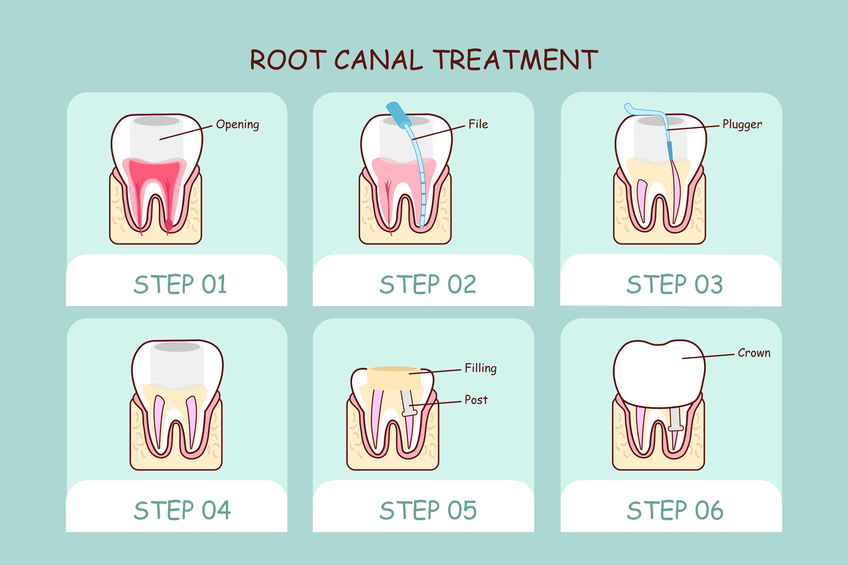 Root Canal Therapies are also performed on caries-free teeth that may have sustained a direct blow during an accident, which may have damaged and inflamed the pulp.

How is a Root Canal performed?

Depending upon the location of the tooth and the number of canals present, root canals can either be performed in a single visit, or in different stages over multiple visits. Here is what happens during the treatment:

The decayed, caries-ridden portion of the tooth is removed and cleaned using a handpiece

Special endodontic files known as K and H files are then used to remove the infected pulp, and shape the canals respectively

Once all the pulpal debris and bacteria have been cleaned and removed, the canals are irrigated using a disinfectant saline solution

These dental canals are then dried and filled using inert GP points, which are thermo-plastic filling materials using in root canal therapies.

The structurally compromised tooth is then fitted with a crown to prevent further damage, and to restore the tooth’s functionality in the oral cavity.

Visiting the dentist’s office in a timely manner when you start experiencing even the slightest bit of sensitivity can save your natural tooth. The sooner an infection is detected, the less time and money it will cost you to get it fixed. Remember, prevention is better than cure!
If you have been experiencing any pain or swelling that makes it difficult for you to eat or sleep properly, give us a call today or visit Salado Creek Dental for a checkup with Dr. Tom Trinh and his team of experts!

Looking For An Amazing Dental Office?